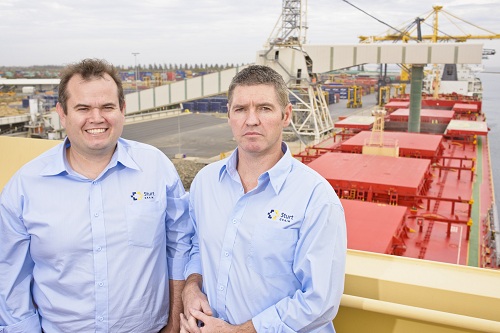 Around 34,000 tonnes of APW1 grown by South Australian farmers was loaded onto the vessel Kynouria at Outer Harbor over the weekend.

The 70,000 tonne vessel – which had already collected half its load from Emerald Grain at Portland in Victoria – is now en route to the Middle East, where its contents will be milled for use in traditional flat breads.

“The 70,000 tonne vessel is one of the biggest ships to load on Australian shores since deregulation took place. It is also the biggest ship loaded by Sturt Grain and its parent company Emerald Grain,” Mr Speed said.

The average grain shipment out of Australia since deregulation is around 35,000 – 40,000 tonnes.

“Since Sturt Grain was established 18 months ago it has worked with hundreds of South Australia’s farming families sourcing quality Australian grain for overseas customers.

“South Australian wheat is in demand for its superior milling quality. Our marketing team is looking to expand its reach further into the Middle East and it’s likely we’ll see more of our state’s grain ending up on plates in destinations like the United Arab Emirates, Oman, Saudi Arabia and the east coast of Africa.”

He said while some growers in the state’s east were still waiting on decent autumn rainfall to shore up the season ahead, most South Australian grain growers were busy sowing crops.

“Although many growers are facing unusually low subsoil moisture levels, we still expect an average area of wheat to be sown across the state this season,” Mr Speed said.