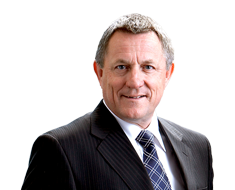 John Murray has been appointed to the role of Chief Executive Officer (CEO) for Emerald Grain Pty Ltd. His appointment will be effective from 2 July 2013.

In announcing the appointment, Emerald Grain Chairman Alan Winney said that Mr Murray had significant agribusiness experience that made him the ideal candidate for the role.

“John’s intimate understanding of the Emerald business, including past experience as a customer, as a director on the Emerald Group Board in 2007-8 and also previously on the board of ABA, adds to his current knowledge and strategic oversight of the grain marketing, supply chain and processing sectors,” Mr Winney said.

Mr Murray’s most recent experience was as Managing Director and CEO of ASX listed company Ridley Corporation Ltd, Australia’s largest stockfeed business and until recently one the largest salt operators in Australia. In this role, he was a key customer of Emerald Grain.

Prior to joining Ridley, Mr Murray was Group General Manager – International Operations with Elders Limited, and from 1995-2004 he was CEO of Ausbulk (formerly SACBH), the grain handling and port operator in South Australia that also successfully entered the grain trading business in 1999. During Mr Murray’s time at Ausbulk this company built and owned, via a JV with Grainco, the Melbourne Port Terminal and the country sites behind the terminal that became ABA, and it also purchased and ran the Joe White Malting business. Emerald bought ABA last year and it now operates the business as part of Emerald Grain.

“John joins Emerald at exciting stage of its development. In the last 12 months we have expanded significantly, integrated a storage and handling business on the east coast into a national trading business, increased the number of storage sites, made significant enhancements to our customer service model, invested in technology, increased our market share in the Australian grains market and moved aggressively into increasing sales into the Middle East and East Asia,” Mr Winney said.

“The Emerald focus is to provide competitive open access supply chain options for Australian grain growers, and to provide buyers with unrivalled access to quality Australian grains. We are very fortunate to have someone like John come on board and lead us forward through the next stage of our growth.”

For the past 12 months, Alan Winney has held dual roles of Chairman and CEO to give the Board sufficient time to conduct a wide ranging search for the most suitable candidate for the CEO role. From 2 July, Alan Winney will return to his Non-Executive role as the Chairman of the Emerald Grain Board.