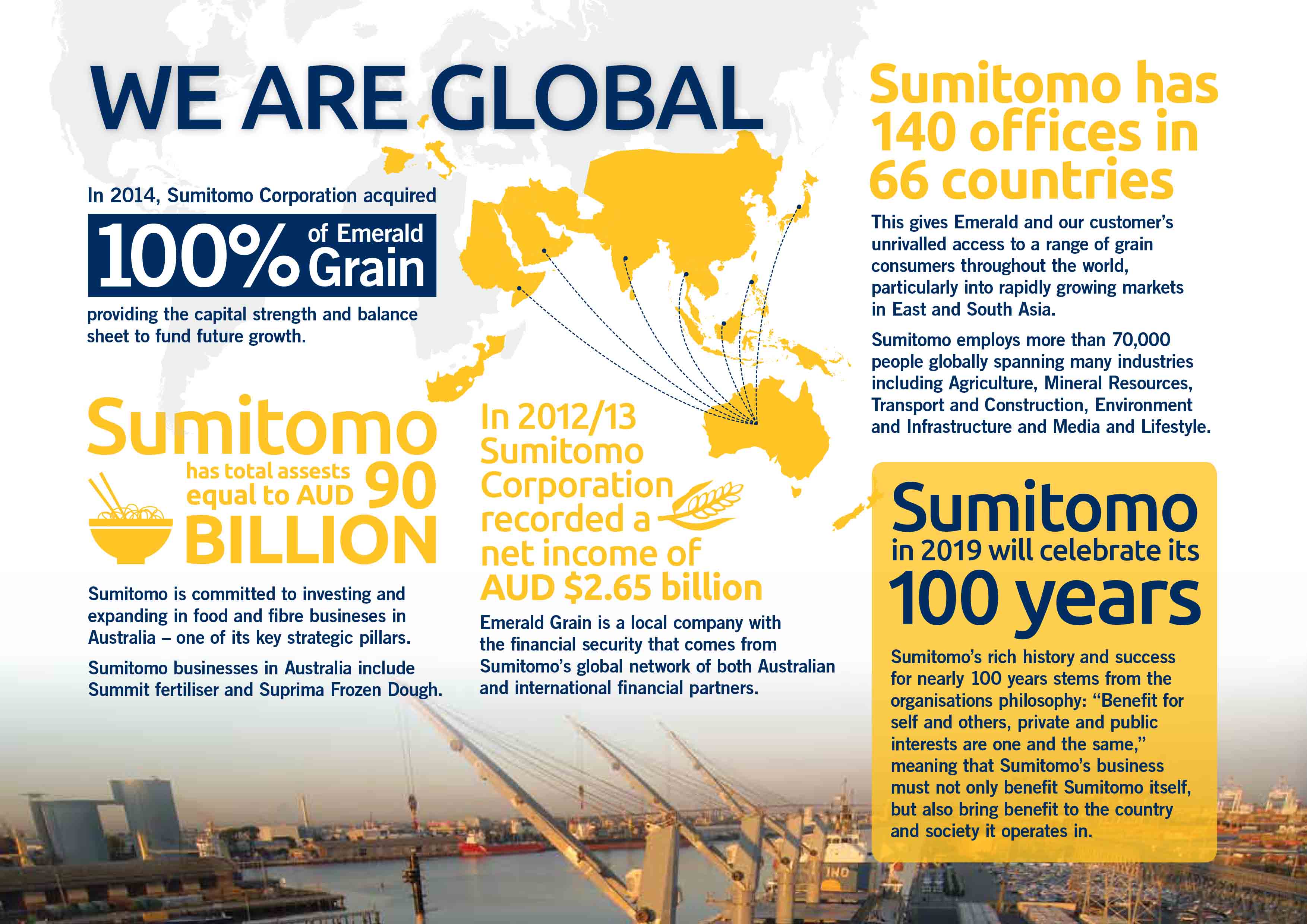 Alan Winney, Chairman of Emerald Grain and of EAG said that it was the right time for the sale of the remaining 50 per cent of the business to Sumitomo Corporation and that it was the next logical step to allow the ongoing growth of the company. “As a 100 per cent subsidiary of Sumitomo Corporation the company will be able to fund future growth and expansion and compete more effectively in an Australian and Asian grain market that is now heavily influenced by global companies,” he said.

Emerald Grain was established as a start up in 2004 to create a grower-focused grain marketing alternative for Australian grain growers. Since then it has grown to become a leading home-grown integrated grain marketing and storage company. It markets 4.5 million tonnes of Australian grain each year domestically and to 35 countries around the globe. It services the needs of more than 10,000 Australian grain growers with grower service personnel located in 27 towns in key grain growing regions Australia-wide. It operates joint ventures with grower companies and co-operatives in New South Wales and Victoria; and it has established in its own storage, transport and logistics infrastructure through its acquisition of the Melbourne Port Terminal and its upcountry storage and rail network.

Mr Winney said that this new ownership structure will give Emerald Grain access to the the significant capital needed to help fund expansion in grain accumulation capability and processing assets. It  will allow Emerald to leverage Sumitomo business assets and networks, ultimately providing greater value and additional services to Australian grain growers.

Sumitomo has a long history of investing in food and agribusiness in Australia.  It first entered the Australian grains sector when it acquired ABA in January 2005.  Emerald Grain then merged with ABA in March 2012 to create an integrated grain supply chain in south eastern Australia.

Sumitomo Corporation has expressed a strong commitment to expanding

its food and agribusinesses footprint in Australia and globally.  This acquisition of Emerald Grain is an important part of that strategy. Sumitomo Corporation General Manager of Grains & Oilseeds and Emerald Director Hiro Kurosaki said Sumitomo intends to run Emerald Grain as an independent subsidiary, under the same name and with the same Chief Executive and the existing strong management team.

“We are very proud to have Emerald Grain 100 per cent owned and as part of the Sumitomo Corporation. It is a strong business that has seen rapid growth and built enduring relationships with growers and grain consumers over many years. It enjoys a unique market position being the only grain marketing company with local grain merchants in all grain growing regions of Australia and its own supply chain network in south eastern Australia, including the port facility at the Port of Melbourne,” he said.

“Emerald Grain will continue to be a brand that represents superior Australian grain,” he said. “Under the new ownership structure Emerald Grain will be well positioned for additional grain and food processing opportunities in Australia and internationally, working alongside its sister companies in Sumitomo.”

The Chairman Alan Winney, and his other two founding directors Mike Chaseling and Mick Cattanach will step down from their existing roles at the time of sale completion and will be replaced by Sumitomo Corporation representatives on the Emerald Board. John Murray was appointed  Chief Executive in July 2013 and will  continue in that role.

FIRB and the ACCC have been consulted in relation to this transaction and both bodies have advised that they will not be examining the transaction further.